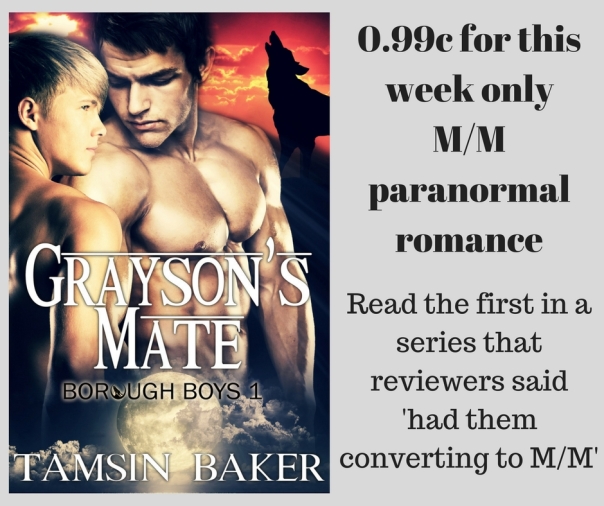 My gorgeous friend Tamsin Baker is having a SALE right now on one of her MM paranormal series. Make sure you check it out!

At thirty-five, Grayson ___ is the accountant and business manager for his werewolf pack. He’s good at his job. Too bad he’s not as successful at finding his destined mate. He’ll know her by a distinctive birth mark, but he’s getting tired of searching.

But the night Grayson finally sees his mark, it’s not on a woman. It’s on a gorgeous guy who wrecked his car near pack headquarters. Grayson brings the beguiling stranger home to heal … and to try and make sense of this strange twist of fate.

Medical student Reagan ___ has studied for ten years at University in Melbourne. At last he’s ready to sit his final exams and head out into the world to heal people. But when he foolishly tries to drive home after a thirty-six-hour hospital shift, Reagan passes out behind the wheel.

He wakes in an unknown world, tucked away in the mountains of Greensborough, with the hottest guy he’s ever met at his bedside. Their mating starts a fire hotter than either werewolf or man has ever known.

But they must make their relationship work against the backdrop of conflict, as Regan struggles to find his place in this new world, and the pack battles the Rogue werewolves who are a constant threat.

When the spoils are counted in the end … can Grayson and Reagan both be victors?